It’s been a few months since I wrote and introduced myself and my work in my first ever blog. I remain optimistic in the hope that you might have found it interesting so here is the next instalment. I’d like to go a step further and share a few ideas, experiments and tentative design thoughts for work being made during my Amanda Moriarty award residency with the glass artist Colin Reid in the spring of 2020. https://www.colinreidglass.co.uk/ 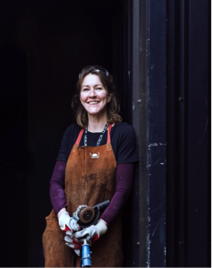 I often have semi-formed ideas for new work floating around in my mind for days, before I actually get around to projecting them further in my sketchbook. Where they might end up blending amongst other sketchbook scribblings or emerge into some material form. This sink or swim potential is mostly influenced by my commitment to the idea and interest in the process. With this particular idea it is about understanding the different forms and evidence of energy in the young saplings (that have split, bent, twisted and engorged their tree guards as they’ve grown). A few simple facts have struck me…trees are made of organic matter; they have a life force, meaning they will continually grow and change direction. If a tree meets something stronger than itself it will simply grow round it or through it .If the obstacle is weaker than itself (as in the case of the tree guards) they will split or push it to one side. 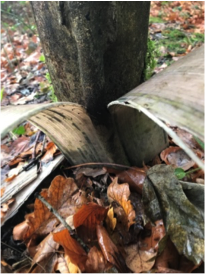 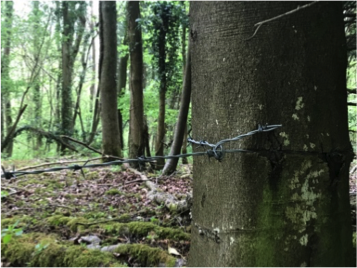 If the tree guards weren’t there I don’t think it would have occurred to me that the smooth barked saplings had such a strong life force, but the mangled fluted forms were a dead giveaway. In this case half my detective work was done for me.

Of course evidence of energy and force is all around us, and often we don’t see the force or the energy so we are left with the evidence and the aftermath. This may be a water trough kicked in by marauding cows, a tractor tyre track in the mud, an imprint of a Agave leaf before it peels from the main stem as it grows, or the more urban skid mark on asphalt. 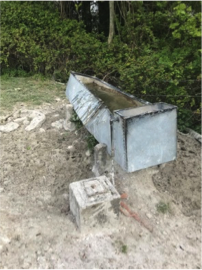 The signs of energy and force. 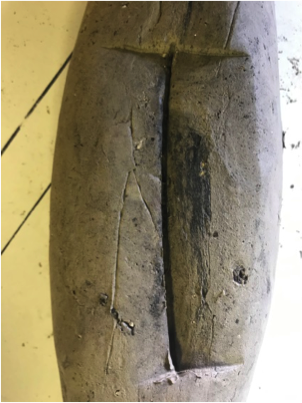 So evidence seems to be the thing that is needed to give force and movement credibility. What forms can this evidence take?

A sign of a former presence: An imprint or something that has left its mark. It was there and is no longer but the shape it leaves behind is evidence. This can be exquisitely beautiful when the material that is impressed against is accepting or brutal looking in the case of the cows and the water trough. The trace or imprint may stay the same or change again depending if the object is organic or non-organic / living or non-living. Some imprints stay the same and some will change. Even a non-living form will decay, rust and breakdown.

A sign of movement: can be shown in different ways. Our brains will tell us that a tree has obviously grown to get around an obstacle, but if there is texture on that tree and it has stretched, or if there is some sort of a scar. We get given more information; texture that moves is very informative. A smooth surface isn’t so convincing at first glance. I spent some time with lumps of clay, different metal forms and plastic fencing wire exploring this. 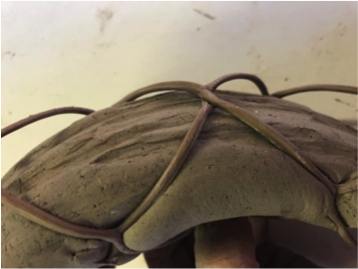 Next comes the process bit: How are all these thoughts going to be translated into some viable pieces of work? My studio material palette consists of steel, glass and copper. All solid, non-organic matter in their end and final state, which is not a lot like a growing moving tree. How appropriate your materials and technique are to the subject matter, or to what you’re trying to show or say is of course a primary consideration for any maker. I had a gut feeling that the forging, mould making and casting process could be used to show the force and movement I wanted, but needed to explore this more.

I want to imbue my materials with the same qualities as an organic sapling or an old oak, they can’t actually grow so somehow I must give them the appearance of growth. As with the work of many glass artists it is about creating an illusion. For example in the extraordinary sculptural glass work of Joseph Harrington where he uses melting ice to take castings from https://www.josephharrington.art/

If the subject material is imprinted with texture that implies movement, and this form is cast into glass, the viewer is almost tricked into believing that the glass has moved. The glass cannot actually behave in the way it is depicted but our brains like to make that easy leap, and at the same time appreciate its fragility, translucency, subtle internal colour and watery shadow.

The mould making process is where real materials with real movement can be transformed into the glass illusions. A material such as clay (that easily takes an impression) is an obvious choice. The clay can be moved, imprinted, dried with heat, cracked and moved again. Direct plaster moulds can be taken from this and if the mould is open, the clay can be easily removed.

In my workshop I also have the benefit of being able to use steel, which can be textured, distorted and moved by direct hammering or, by the use of swages, or of course even melting under extreme heat. There are huge differences in the resulting textures and imprints that can be obtained in both clay and steel. Both have their pros and cons, I can’t get the effect of an edge cut with an oxy acetylene torch in clay, but for quick experiments with immediate results combined with all its reusable benefits clay is invaluable.

I want the element that has provided the force to be made of steel. This part (unlike the clay or metal influenced object) remains true to its inherent qualities throughout the process. After the glass is fired in the kiln the steel will re-join the glass to complete the illusion.

I have carried out several experiments using the borosilicate glass from Colin. The general aim of these was to work out how to show a convincing amount of presence and movement.

These first two are shown in my previous blog https://carawassenberg.com/texture-transition-and-energy/

Something with a living energy grows through something that is static. Redirection through obstacles, Here the subtle changes in the glass form give the clues…be it a pucker, a wrinkle, a crease or an overlap. 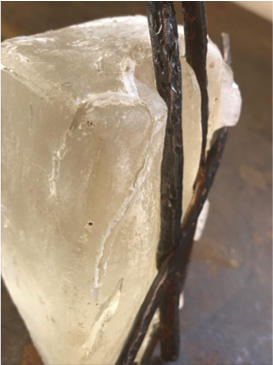 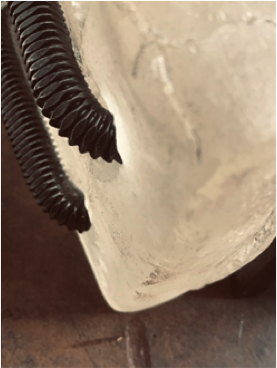 Moving by pressure something softer than the steel itself, to give the feeling of something growing beyond its presumed limits. After firing, the steel is re fitted. The challenge here is to construct the steel element so it is removable and can come away from the clay, with minimum disruption and be refitted on to the glass after firing. The clay form must either be cast immediately to avoid shrinking (otherwise the steel will not fit back) or kept damp. The logical next step after this experiment is to look at more ways of tightening to result in a pressured form. The aim being to make the glass look like it has grown through a restriction. 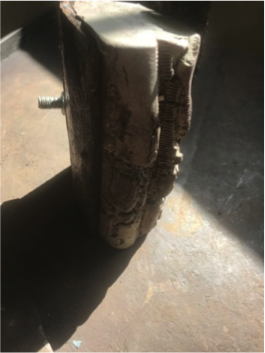 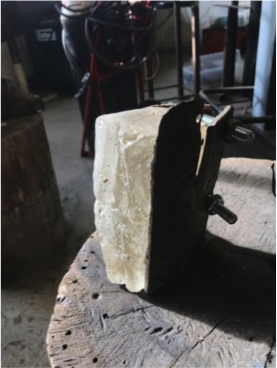 The receiving material (clay), has been pushed beyond its limits and cracked. As a tree guard would when the sapling outgrows it. The imprint of the intense applied force is shown under the head of the screw.

In this experiment there is also a strong aesthetic between the deliberately rusted screw (in a nitric acid solution), and the honey, almost aged /discoloured colour of the glass. This farmyard rusted metal, peeling paint aesthetic has always appealed to me partly as a result of childhood memories, but also for its implications of history and a past use. The fact that it has been attacked by the environment and weather (a raw force) connects us to the elements. 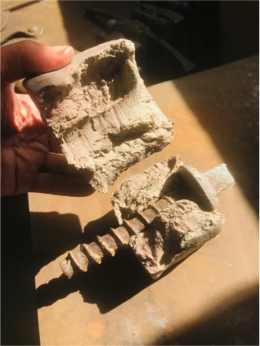 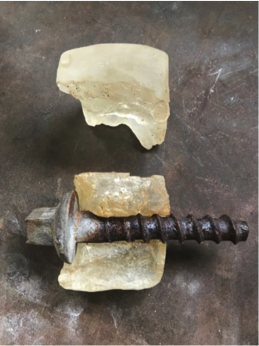 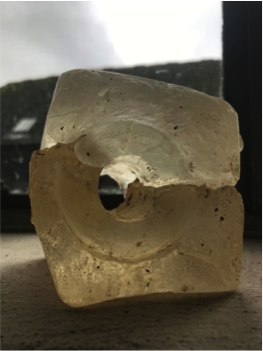 This stage happens after the nudge, the expansion, the explosion, there is then almost an engulfing. At this point the two materials seem to find some sort of way of coexisting. Influences/effects are still evident in an internal stain or an external pucker, but there is an acceptance (albeit an uncomfortable one). The organic material seems to have assumed the upper hand. 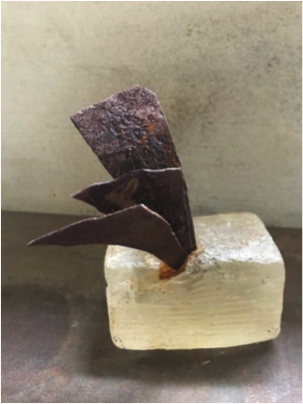 I haven’t as yet reached one, but perhaps I have somehow filtered a hugely fertile subject into more manageable bitesize chunks. From these four experiments I can now see a way to move forward to designing a final piece.
Whether I like it or not that old chestnut Anthropomorphism had crept in, that is, the attribution of human traits, emotions, or intentions to non-human entities.
I start to see these stages a nudge, an expansion, an explosion and engulfing very much paralleled in life terms. It frequently happens in my work, and I am wary of letting it push a piece to becoming overly prescriptive on the viewer, or “emotionally gooey”.
So next stop final design prior to my spring residency…watch this space.

Happy Christmas!
May it be curiously creative and utterly unpredictable?